The girl who was stoned to death for falling in love

A teenage girl lies dead on the ground in a pool of her own blood.

Her once groomed hair is cast across her face like a rag doll's, her skirt pulled up to complete her humiliation.

In another image, she is seen lying on her side, her face battered and bloodied, barely recognisable.

The concrete block used to smash in her face lies next to her.

Du'a Khalil Aswad was beaten, kicked and stoned for 30 minutes at the hands of a lynch mob before one of her attackers launched a carefully aimed fatal blow.

Scroll down for more... 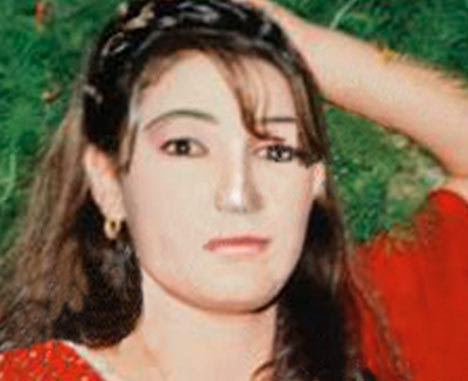 Du'a Khalil Aswad: Killed by a lynch mob for falling in love

The murder was carried out in public, watched by hundreds of men cheering and yelling. Du'a's crime? To fall in love with a Sunni boy. Her family practised the Yezidi religion.

The Sunnis and Yezidis hate each other. When Du'a ran away with her Sunni boyfriend, a sentence of death was passed on her.

This act of medieval savagery took place last month in a town in northern Iraq, in the fledgling 'democracy' created by Bush and Blair when they invaded the country in 2003 and 'freed' its people.

Scroll down for more...

Brutal images captured by onlookers or the barbaric stoning

The sickening scenes, which defy belief in every sense, were captured by some of the observers and participants who thought it would be proper to record these harrowing events as some sort of memento.

Perhaps they thought it would serve as a warning to other young people who dared to follow their hearts - not the strictures of a religion which will not brook dissent - and punishes adolescent impetuosity with the most brutal of public murders.

The killing was filmed on a number of mobile phones. The images were then - all too predictably - posted on the internet.

The Mail takes no pleasure in publishing these pictures. But we believe our readers should witness the depths of the depravity still being carried out in the 21st century in the name of 'honour'.

Perhaps, then, something can be done to prevent it happening again.

Of course, anyone who takes even a passing interest in news is all too aware of the tragedy that has engulfed the people of Iraq: the daily bombings, murders and kidnappings.

The subjugation of its women, however, has been largely ignored. Yet according to cultural observers, the number of so-called 'honour killings' has increased in Iraq since the fall of Saddam Hussein.

Campaigners say there is an 'epidemic' of such killings in the wartorn country. Autopsy reports in Baghdad often conclude with the verdict: "Killed to wash away her disgrace."

The filming of Du'a's death was just one more macabre element of her killing, but it has achieved something those bloodthirsty amateur filmmakers could not have predicted: it has brought such practices into the open and exposed them to the wider world.

It is, of course, too late for Du'a, a strikingly pretty young girl with long auburn hair. The 17-year-old must have hoped that the 'liberation' of her country would afford her opportunities she might otherwise never have had - for her education and a life of happiness free from oppression.

She lived with her family in the town of Bashika, near Mosul. They were neither rich nor poor.

It is believed Du'a met her Sunni boyfriend - whose name is not known - several months ago. They had grown up in an environment where hatred against rival factions is the norm.

The Yezidis - a Gnostic sect which combines Islamic teachings with Persian religions - despise the Sunnis; the Sunnis loathe the Yezidis.

Du'a and her boyfriend would have been all too aware that theirs was a forbidden love. But like so many teenagers before them, right back to the illicit love of Romeo and Juliet, they couldn't help themselves.

For a while, they met in secret. It was during one such highly charged meeting that they came up with a plan to run away together.

It is not clear whether this desperate measure was a result of their having sought and been refused permission to marry, or if they decided to do it knowing that such permission would never be obtained.

"Her family would never have agreed to such a marriage," says Diana Nammi, a leading Kurdish women's rights campaigner.

Some Muslim groups have claimed that Du'a converted to Islam shortly before her murder. According to other reports, her boyfriend denies this.

They ran away together to an address in Bashika. The girl's family alerted the police and Du'a and her boyfriend were found just a few days later.

According to Ms Nammi, who is calling for the girl's killers to be brought to justice, Du'a was arrested and put into prison.

A few days later, the police apparently received assurances from the leader of her tribe - who Ms Nammi believes is Du'a's uncle - that the girl would not be harmed.

What happened next is the subject of conflicting reports. According to some, the house of the tribal leader was stormed by a mob and Du'a dragged out and killed.

Ms Nammi, however, says she has information that it was the tribal leader who betrayed his niece to the mob. In this man's eyes, Du'a had committed an unforgiveable crime, punishable by death.

The family's 'honour' had been besmirched. The moment Du'a was placed in his house, her fate was sealed.

On April 7, Du'a was brought out of the house in a headlock to face the lynch mob. Hundreds of men were waiting for her - the excited atmosphere is said to have resembled a large sporting event - but no women.

On the video, Du'a's screams can be heard as she is dragged to the ground. In a further humiliation, her lower body has been stripped.

Instinctively, Du'a tries to cover herself; only later was a piece of clothing thrown over her.

She is surrounded by an enormous crowd jockeying for a good view of the ritualistic killing. About nine men take part in the attack, including, it is thought, members of the girl's family.

To any father of a daughter, that a helpless girl should be set upon with such cowardly savagery is beyond comprehension. One can barely imagine her terror.

It is a profoundly disturbing spectacle. One man kicks her hard between the legs as she screams in agony. Du'a tries to lift herself up, but someone hurls a concrete block into her face.

Another man stamps on her face. Someone kicks her in the stomach. Police officers stand idly by, some of them apparently enjoying the spectacle as much as anyone else.

Meanwhile, some observers film the execution on their mobile phones - the modern world intruding on a spectacle that belongs more in the Roman arena than in an apparently civilised society.

After half an hour of this savagery, Du'a is finally - mercifully, perhaps - dead. In a final humiliation, a man tries to lift her up, but drops her again, and her bloodied body is rolled face down into a puddle of blood. The family has had its 'honour' restored.

According to Ms Nammi, Du'a's parents did not want her to be stoned, though it is not clear whether they might have agreed for her to be killed in some other way.

After her murder, according to Ms Nammi, two men were arrested by Iraqi police, but she has heard they were subsequently released without charge.

Reports suggest that two of Du'a's uncles and four other people fled the town as investigators began to search for the culprits. It is thought these included her brother, who appeared in the video of the murder.

As for Du'a's boyfriend - who has lost the girl he loved in the most awful circumstances imaginable - he went into hiding for a while, but it is believed that no action has been taken against him.

Du'a was buried in a simple unmarked grave. Later, says Ms Nammi, her body was exhumed by the Kurdish authorities, who have autonomous control of the region, and sent to the Medico-legal Institute in Mosul.

There her body was examined to find out whether she had been a virgin or not, before being returned to the Sheikh Shams cemetery.

To our Western eyes, this posthumous assault on Du'a's body is the final insult. But according to Ms Nammi, it did at least establish that she was still a virgin and innocent of the 'crime' of which she had been accused.

However, Ms Nammi believes the mere fact that Du'a had run off with a Sunni boy would have been enough to have her sentenced to death.

Meanwhile, the cycle of tit-for-tat murders continues in Iraq. In this instance, in an apparent act of retaliation for Du'a's murder, 23 Yezidi workers were attacked and killed two weeks later, apparently by members of an armed Sunni group.

The men were travelling on a bus between Mosul and Bashika when their vehicle was halted by the gunmen, who made them disembark before killing them.

Tomorrow evening, Ms Nammi, founding member of the Iranian and Kurdish Women's Rights Organisation, will lead a group of women meeting in Shoreditch, East London, to remember Du'a Khalil Aswad and give back to her the dignity torn from her by her violent death.

The women are pledged to campaign against the entrenched beliefs which lead to such senseless deaths - and the fact that the people who commit these crimes are not regarded as murderers, but as heroes of the community.

According to Ms Nammi, there have been an estimated 10,000 cases of honour killings in the Kurdistan region in the past decade.

Under Iraqi law, the punishment for anyone found guilty of an honour killing is just six months in prison.

"Something has to be done to stop this," says Ms Nammi, who came to Britain in 1996. "There is an epidemic of so-called honour killings. It is almost routine and utterly unacceptable.

"We would greatly appreciate any contribution from the British Government in preventing these murders of women in Iraq."

Ms Nammi has the support of Amnesty International.

"This young girl's murder is truly abhorrent and her killers must be brought to justice," says Kate Allen, Amnesty International UK Director.

"Unless the authorities respond vigorously to this and other reports of crimes in the name of "honour", we must fear for the future of the women in Iraq."

For the sake of 17-year-old Du'a, an innocent girl who simply fell in love with the wrong man, it is all too little, too late.